One of My Favorite Places in the World

I love to travel.

I especially love our vagabond way my wife and I travel the United States: via towed camper. This gives us the flexibility to leave the unit so that we can explore with just the truck, pull into a rest area or a friendly merchant (Most Wal-Marts and Flying J's will let us do this.) for a quick overnight or only a nap.

Among the many places we've visited, my favorite (so far) is Badlands National Park in South Dakota, United States. This desolate and inhospitable bowl on the high prairies has a surreal beauty that changes view every few feet!

The last time we were there, rains poured on the area for the previous week. I had never seen it so green! The rain deepened the colors as it saturated the hills. No filters were necessary to enhance the otherwise subtle colors. The enhanced colors made the inconvenience of photographing in the rain worth the effort.

I hope to camp at the park a full week so I can take time to photograph more of the many moods of the Badlands. That may be a few years off.
Posted by Unknown at 21:17 No comments:

Have studio, will travel.


How I work with a portable studio.

When I started doing portraiture, I saw a niche in the many events that my history club puts on, and few formal ways to document the effort and comportment of the participants.

We have a regular summer event, Warriors and Warlords or WW, which regularly draws over 600 participants from all over the Midwest, upper Plains and parts of southern Canada. My idea is to have a studio that I can literally set up in the middle of a field, control the light with various methods (which incidentally kept the studio a little cooler than outside--a plus when the Heat Index approaches or passes 100 degrees F!), and photograph my friends in their finery to display on their walls and for their friends via social media. The big plus for many was that each had an 8x10 print of their portrait within an hour at most to take home and put on his or her wall. All this for the low, low price of $40. More goodies were available if they wanted them.

Yes, I'm working cheap here. I expected an average of two sessions per hour when I was open, to amount to a score a day. I never achieved that volume. The most I ever did was eight in one day for a winter event that had a charity component, and nine for the whole four-day run of WW. There were two years at WW that I didn't have any clients! The summer heat and humidity aren't conducive to people wanting to wear layers of finery. I actually had one family rush in and settle down for their portraits, then rush out so they can change to cooler clothes! I actually have better sales during winter events, when people are already showing off their finery and are willing to be posed in a warm, comfortable space.

Such is the adjustment of my business/service model. More winter events.

To offer this service at such a ridiculous price means I have to be creative with my equipment. The most expensive pieces of my set-up were of course my camera and lenses, followed by a robust notebook computer and quality photo printer. I'm a Pentax fan from way back, and have an assortment of compatible manual lenses. I started with a K-01 body, 18-55 mm f4.5 and 50-200 mm f4.5 lenses, Tambon 65" tripod, Toshiba 15" Satellite and HP Photosmart 5220 printer. I later upgraded to a 17" Toshiba Satellite and a Pentax K-3 II body. I found a Manfrotto 100" studio tripod and three-way head in the local Pawn America for $100 and snapped that up.

For lights, I use a 68" dual 500 watt halogen work light tower bounced into a 42" reflecting umbrella for my fill light, two 1000 candlepower LED work lights and two more 1250 CP LED spot lights in hot light fixtures for my main light, all daylight balanced. I use either three colored CFL bulbs in clip lights or another 1000 CP LED daylight flood in a clip light for the backdrop light. My decorative lights and general work lights are all LED. When shooting, I use all of 7 amps, an advantage when you are limited to 15 amps.

The studio itself is a Coleman 10'x 10' canopy with a swing wall, effectively giving me a footprint of 10' x 17' with the wall raised up. I purchased a 40' wind wall set for the canopy, under which I use an assortment of power cords and junctions to redistribute power where I need it.

Sunlight was first controlled with the use of fleece blankets, an outer layer of white to reflect and an inner layer of black to absorb. I've largely traded the white blankets for black-out curtains, to cut down on bulk. You can't argue with the texture of the black polyester fleece when you want a dead-black background, so I kept them. I use a photo backdrop frame that can expand to 10' wide and 10' tall with a 10' x 12' linen mottled grey backdrop. I paid full price for the backdrop and never regretted the cost.

Most of this packs into three tubs (It used to be six!), with four long bundles for the light stand, tripod and backdrop stand. The canopy has its own bag, as well as the walls and backdrop. There is a folding table, a rigger's bag with electrical cable and connections, a bushel bag of spring clips (and that still isn't enough!), folding stools and chairs.

The whole thing takes about an hour and a half to set up outside, a little less inside as I don't have to shield the walls as much.

It does make a satisfying space to work in, and was well worth the time I put into making it.
Posted by Unknown at 22:48 No comments:

Wow.
It's been nearly two years since I posted last. I'm sorry for the silence.
There is a lot to say about different things, But for now I'll say this:
I'm back! 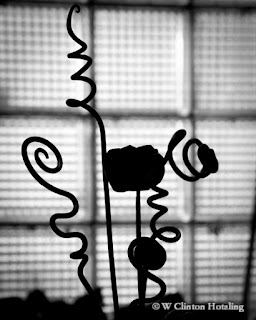